Abstract: ESBTTM is composed of a high voltage bipolar transistor and a low voltage power MOSFET with a low on-state resistance. The two devices are connected by a common generation common base amplifier (CASCODE) structure.The main advantages of this solution are fast turn-off and low pressure drop during

conduction.Because of these characteristics, the ESBTTM series represents an ideal solution for conventional switching applications with full or quasi resonant converters.

The recently launched ESBTTM (Emitter Switch Bipolar Transistor) is a new line of electrical actuators that are a valuable cost effective solution for applications requiring high voltage and high switching frequencies.This article begins with an introduction to the characteristics of the emitter switch topology, followed by a brief description of the techniques required to design a system-on-chip scheme.In order to introduce a more efficient problem that can overcome the limits of standard base-bias networks well known in the literature, the driving method used by the emitter switch structure is also analyzed in depth.

Finally, ESBTTM was successful in testing a zero-voltage quasi-resonant converter (ZVQR), which represents the most common converter topology used in induction cooker systems. 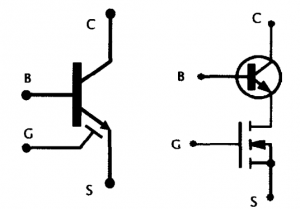 This structure was known as early as the 1980s, but it is only today that it has attracted wider attention,This is due to the advent of better bipolar transistors that can achieve square RBSOA performance (using the common generation common base amplifier topology) and low-voltage power MOSFEts with very low on-state resistance similar to ideal on-stage switches.

There is no conceptual difference between a monolithic circuit and a discrete device solution for the electrical characteristics of this structure, and the following considerations are appropriate for both solutions.

As shown in Figure 1, this configuration requires two power supplies: a first supply ensures the required current is supplied to the base of the power bipolar transistor, and a second supply is used to drive the gate of the power MOSFET.In effect, the bias applied to the power bipolar transistor is a constant voltage source between the base and ground;A PWM controller directly drives the gate of a power MOSFET tube. The negative base current is equal to the collector current, so the power bipolar transistor has a lower turn-off time than any conventional power bipolar transistor currently, comparable to a high voltage power MOSFET crystal.Because the emitter configuration is floating, the high intensity of the reverse current causes the charge stored at the base to disappear quickly, thus reducing the charge storage time. Moreover, this configuration essentially eliminates the tail current characteristics of devices based on power bipolar crystals.

In addition, these structures extend the limits of the safe working zone for reverse bias by increasing the secondary side penetration resistance. In fact, because the emitter is open, current congestion under the emitter finger (which can produce hot spots) is virtually eliminated.

Using a four - or five-pin package, using a hybrid device (two different chips) or a single chip, it is possible to achieve a co-generation common-base amplifier architecture.The monolithic scheme integrates a vertical NPN power transistor and a low voltage standard MOSFET within a single chip.FIG. 4 is a structural section of a unit. It is worth noting that there is a P-well region below the base contact, which with the integrated power MOSFET tube forms a usually on-state transverse parasitic gate bipolar transistor IGBT (must always be supplied at a constant voltage to the base of the power bipolar transistor).As a result, the current capacity of the ESBT is significantly reduced.To avoid such phenomena, a doping layer and sinker of appropriate size were added at an appropriate distance from the MOSFET, as shown in the cross section of FIG. 4.

Because the power MOSFET structure is distributed under the emitter finger, this structure can eventually automatically township, preventing the hot spot effect caused by current concentration.As a result, the monolithic device has excellent durability, with forward and reverse security zones (FBSOA and RBSOA) far superior to equivalent discrete emitter switch solutions.

As mentioned above, ESBTTM requires two drive sources to bias its base and gate respectively. A simple constant voltage is sufficient for the base of ESBTTM. However, this constant voltage source may not drive the switch correctly when the current fluctuation is very large and/or the switching frequency is very high. The quasi-resonant converter can be driven using a constant-voltage base method, as shown in Figure 5.VB voltage can maintain constant voltage because of the electrolytic capacitor CB, so this capacitor must be selected to optimize the drive circuit, so that it can achieve the maximum current.Therefore, for all other operating conditions, the lower the current, the higher the device supersaturation, the longer the charge storage time.The undesirable effect of supersaturation is that a long tail appears in the current waveform during transistor off, which causes a large amount of power loss.

The driving method of adjusting the base voltage and current according to the instantaneous current of the collector is an effective method to solve this problem.In the drive circuit in Figure 6, the base of the ESBTTM is connected to a current converter, which applies a proportional bias to the base. This approach has many advantages: first, the designer no longer needs any constant voltage source, and second, the current provided by the current converter has the same waveform as the collector current. With a smaller capacitor (non-electrolytic capacitor) CB, the device performance can be further improved.During the start of the conduction, VB will be higher than VB 'to meet the peak current requirements.From this voltage value, the initial current peak and duration can be adjusted: the smaller the capacitance value, the shorter the peak current duration, and the higher the VB voltage (limited only by zener diode voltage).

The ESBT T M introduced in this paper is an electric actuator based on the concept of emitter switch. After a brief introduction in integration, we also explore the driving requirements of the device, and propose a solution suitable for optimizing ESBT characteristics in the electromagnetic oven ZVQR converter.We also discuss the driving requirements of the base and propose a more efficient base bias network.

Finally, we measure the main switching waveform in 1500W induction furnace system, and compare the performance of standard IGBT and ESBTTM. The test results show that ESBTTM is the best solution for ZVQR converter in terms of overall efficiency and total power consumption.